Christ Over, In, and Through All Scripture

How does Christ’s Lordship over Scripture inform how we at Christ Over All read and approach the Bible? In 1897, Charles M. Sheldon introduced the now ubiquitous question, “What would Jesus do?” when he published In His Steps: What Would Jesus Do? He was a “Social Gospel” preacher who compiled sermons he preached at Central Congregational Church in Topeka, Kansas, into an accessible book. He influenced multiple generations of professing Christians from all denominations, including many Evangelicals, to ground their ethical choices not in Scripture’s teaching but in an Ethical Jesus. They dislodged this “Jesus” from Scripture, transported him into their framework, and then asked what he would do in the situations they encountered.

In 2007, a century later, red-letter Bibles gave rise to Red Letter Christians, founded by Tony Campolo and Shane Claiborne. Their mission is to stand apart from “Western Christianity” which they believe has “lost its focus on Jesus” and misuses “the word ‘evangelical’ to identify a voting bloc.” Ostensibly they desire a church that looks like Jesus and a recovery of “the term evangelical to mean a people who bring good news to the world.” They allege that many, especially young people, abandon the church but not Jesus. What they forsake is American Nationalism cloaked as Christianity. Red Letter Christians feign neutrality even as they caricature Christians from whom they isolate: “We . . . are not partisan. God is not a Democrat or a Republican. Our allegiance is not to the donkey or to the elephant, but to the Lamb. But much of what we see today is not about the Right and Left—it is about right and wrong.” They assert, “Jesus is the lens through which we interpret the Bible, and the lens through which we interpret the world we live in.”[1]

1. All citations found on the website “Red Letter Christian,” https://www.redletterchristians.org/our-mission-our-story/.

Their Red Letter Jesus is a contemporary version of the Ethical Jesus Charles Sheldon fabricated by asking, “What would Jesus do?” While supposing they honor Jesus Christ, they act subversively to his kingship by detaching him and his teachings from the Scriptures which are thoroughly imbued with his presence from “in the beginning” of Genesis 1:1 to the “Amen” of Revelation 22:21. Thus, the ethical and moral dominion they bequeath to the silence of their Red Letter Jesus subverts the authority of Holy Scripture apart from which we would not know God’s Son, the Lord Jesus Christ. Consequently, despite whatever protests they might raise, it is evident that they mutate the Lamb into a donkey. Because they allege that Jesus did not address many of the most urgent issues that dominate contemporaries, they regularly appeal to their Red Letter Jesus to bray for a Leftist political, social, and cultural ideology against which the Law, the Prophets, the Writings, the Gospels, and the Letters both bleat and roar.

Every endeavor to discover an Ethical Jesus who does not at once reside in and personify the whole of Scripture—being himself the Word of God—mutes Jesus’s voice concerning issues that daily fill newsfeeds. Such efforts to tone down Christ’s present dominion over the entire created reality, including every human activity, dishonors King Jesus. Stated succinctly, the incarnate Word, who is the Lion of Judah and the Lamb who was slain, our Lord Jesus Christ, saturates the entirety of Scripture, both Old and New Testaments, as the one to whom ownership of every cubic inch of the created heavens and earth belongs.

Christians confess that Jesus Christ, God’s Son, is eternally existent and is not a construct of the Scriptures. The Gospel of John clearly affirms that the Word’s existence does not depend upon the written Word of God, for, “In the beginning was the Word, and the Word was with God, and the Word was God. He was with God in the beginning” (John 1:1-2). Indeed, the Word precedes the Scriptures, but apart from God’s double condescension, we would know nothing about his Son.

First, he condescended to reveal his Son, the Word. God did this through his authorized written word conveyed to us through his prophets and holy men of old. Then, in the fullness of time, God condescended a second time by giving his Son to become the enfleshed Word in whom the Law, the Prophets, and the Writings find their fulfillment. This incarnate Son is the one in whom the Gospels and the Epistles cohere, bear testimony, and hold authority over us concerning all of life, especially morally and ethically.

Consequently, God’s Living Word and his written word are indivisible. They constitute God’s unified speech to us. The black letters brim with red, and the red brims with black. Apart from the Holy Scriptures, we would not know the Lord Christ. Christ reveals himself to us throughout both the Old and New Testaments. Thus, to obey Jesus Christ is to obey the Scriptures; to obey God’s written Word is to obey the Incarnate Word. Therefore, regardless of how pious we may think it is, any attempt to put distance between the Incarnate Word and God’s Written Word results in fashioning a false and idolatrous Jesus, against which the Lord Jesus Christ warns (Mark 13:21-23).

God’s revealed Word is his authorized testimony concerning his Son. Jesus is Lord over the whole of the Scriptures which from beginning to end bear testimony that he is “the Alpha and the Omega, the first and the last, the beginning and the end” (Rev. 22:13). Thus, the Word’s dominion over everything is inseparable from the authority God vested in his written Word. Consequently, to seek a Jesus whose identity is found in the red letters of the Gospels somewhat loosely detached from the entirety of the Scriptures is to fabricate a truncated Jesus at best and to fall short of embracing the Jesus who simultaneously inhabits and embodies the whole of Scripture.

We who publish the Christ Over All website are devoted to affirming, upholding, and promoting the belief that every aspect of human living is subject to Christ’s Lordship mediated through Holy Scripture. We delightfully and openly confess Christ Jesus is King, Lord over everything, including those who refuse to acknowledge this truth. We also joyfully and unabashedly affirm that the sixty-six books of Holy Scripture, from Genesis 1:1 to Revelation 22:21, are God’s authorized portrayal of the reality of his unfolding story. This story announces the preparations for King Jesus, the anticipated coming of the King, the King’s arrival and rejection, and the King’s conquering return.

Consequently, we approach Scripture as a fully unified library of texts that all cohere in Christ Jesus and bring his Lordship to bear upon every aspect of our human world and life view. We ask not “what would Jesus do,” but “how does Christ’s Lordship transform religious devotion, use of language, intellectual engagements, appreciation of arts and literature, social interactions, cultural customs and traditions, economic intercourse, governmental form, and political allegiance?” Indeed, it is impossible to avoid the pervasiveness of Christ’s dominion over every activity or affair humans engage. And if we seek to escape his universal dominion, we do so to our own peril. 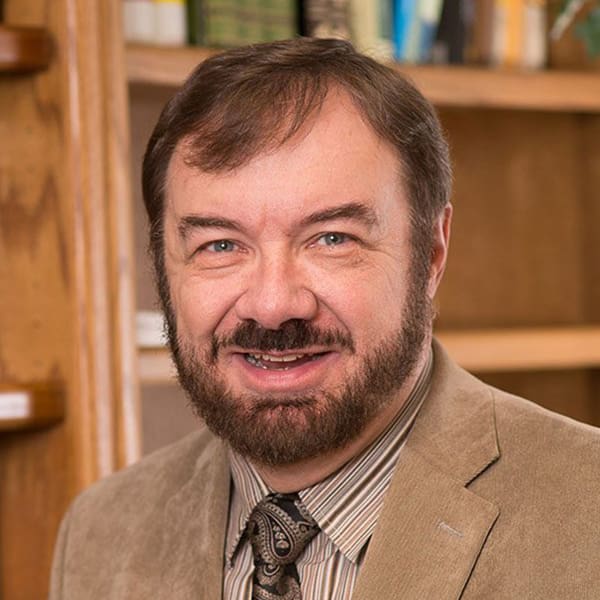 Ardel Caneday continues as an adjunct faculty member at University of Northwestern after recently retiring from his role as Professor of New Testament & Greek. Ardel completed the MDiv and ThM at Grace Theological Seminary and the PhD in New Testament at Trinity Evangelical Divinity School. He is a founding teaching elder of Christ Bible Church (Roseville, MN). He co-edited with Matthew Barrett Four Views on the Historical Adam, co-authored with Thomas R. Schreiner The Race Set Before Us, and has published many articles in Christian magazines, journals, books, and online.