Christ Over the Internet

The whole earth has once again been covered in a flood. This time, it’s not water from the fountains of the deep and the windows of the heavens as in Noah’s day. No, this time the whole earth has been bathed in a flood of information – a flood of bytes and pixels that aren’t even really there in a tangible sense but are ever-present all the same. The much heralded information superhighway of days gone by has eclipsed even the greatest expectations of Arthur C. Clarke’s prophesies of 60 years ago.

We are awash in communication, and there is virtually no quarter in which to hide from it. No 5G tower near you? No problem. On our satellite-blanketed planet, you’re only without coverage in the depths of the deepest caves. The effect of this all-encompassing blanket of coverage can either be comforting (knowing you likely can’t get lost), or suffocating (knowing that someone can likely always find you).

This isn’t, of course, the first major technological sea change in the history of mankind. But if the advent of the scroll and the codex were torrential downpours of technology (with Johannes Gutenberg’s moveable type press only raising the water levels), then the internet and all its children are an overwhelming tsunami upon civilization.

Before the rise of the internet in 1985, Neil Postman wrote in Amusing Ourselves to Death that television at that point had become so deeply embedded into the consciousness that it was invisible. He said, “Twenty years ago the question, ‘Does television shape culture or merely reflect it?’ held considerable interest for many scholars and social critics. The question has largely disappeared as television has become our culture” (p. 79).

Or is it? As Solomon reminded us, “Is there a thing of which it is said, ‘See, this is new’? It has been already in the ages before us” (Eccl. 1:10). All the wonders and newness of the internet age didn’t close the door on the evil and sin that preceded it. In fact, it seems to have billowed new life into humankind’s depravity, sometimes accelerating it at a breakneck pace. It has made the peddling of pornography, child sexual abuse material, and all manner of other sexual deviancies flourish as industries, legal or not. The new technology has accelerated the old sin that was creeping at our door.

Amid these more egregious negative outcomes of our digital age, there is also the pernicious numbing effect that internet culture has on our minds. Writing in The Atlantic in 2008, Nicholas Carr asked “Is Google Making Us Stupid?” It was, he concluded, and he lamented:

What the Net seems to be doing is chipping away my capacity for concentration and contemplation. Whether I’m online or not, my mind now expects to take in information the way the Net distributes it: in a swiftly moving stream of particles. Once I was a scuba diver in the sea of words. Now I zip along the surface like a guy on a Jet Ski.

More than a decade later, if you’ve read the previous 600 or so words, kudos to you. The internet’s summary culture doesn’t favor longform because you absolutely must get to the next thing that’s always lurking, promising to be better than the last thing. TL;DR (Too Long; Didn’t Read) has become a rallying cry for the abrupt communication in which we live.

So here we find ourselves drowning in this Flood 2.0, which has reshaped the face of the earth—not destroying wickedness, but amplifying it, and numbing our minds along the way. Therefore, it is worth asking: Is yet another website needed—even if it is focused on a biblical approach to life, thought, and practice? Can anything good come out of Nazareth?

In writing about the Areopagus of Athens, Luke said in Acts 17:21, “Now all the Athenians and the foreigners who lived there would spend their time in nothing except telling or hearing something new.” As far as we can tell, Luke didn’t have a Twitter account, but his observation about Athens tracks remarkably close to our own modern-day public squares. As Luke tells us, Paul went into the Areopagus, and brought strange things to their ears. In response, some mocked, but others wanted to hear more.

The many words of the Areopagus couldn’t save sinners—they couldn’t even save Greek culture in the long run. But the strange word Paul was introducing in this venue was indeed that word, the word above all earthly powers, the Word made flesh, now seated to reign in glory— no thanks to them abideth. Christ was over the Areopagus, and he is over any internet that could ever be fathomed, even if it is a network of darkness and death.

The spirit of the age that would have reign over this network of darkness is one of deconstruction. Tearing down is its business, leaving the carnage of both body and soul in its wake—a culture that leaves cancellation as its ultimate end. But Christ is a creator, and we as his followers have before us the opportunity to follow his lead. We cannot create ex nihilo, but under his power, we can build within this network of nihilism. We can speak light into the darkness of this flood because the light shines in the darkness, and the darkness has not overcome it.

Lord willing, Christ Over All will be a beacon that reflects the light of the world upon this technological flood. If we remember, the greatest technology in our salvation is a rudimentary device with two intersecting wooden beams. It was a device of death, but the man who died on it is the Christ who is over all. Of the making of many websites there is no end, and it is left for us here within this tempest to keep answering the age-old question, “Who then is this, that even the wind and the sea obey him?” That same Christ speaks, “Peace, be still!” to the torrent that floods us today. May he make the flood cease that we might be filled with his Word. 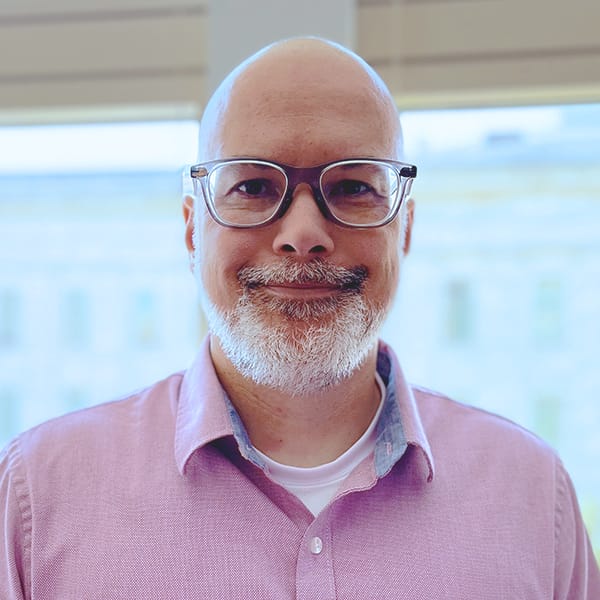 Jared Bridges is pastor of family ministry at Occoquan Bible Church in Woodbridge, Virginia. A graduate of the University of Tennessee and The Southern Baptist Theological Seminary, he is currently a vice president for Family Research Council, where he serves as editor-in-chief of its news and commentary outlet, The Washington Stand.