In November, Christ Over All offered a decade-by-decade engagement with evangelicalism. We would encourage you to go read many of those fine essays. In this two-part “Encore Essay” by Mark Devine, we return to our November theme, Engaging Evangelicalism, because of its many applications for our January theme: Roe v Wade after Dobbs.

While Evangelicals should not define themselves by politics, they have had an outsized role in political affairs throughout America’s history. Therefore, to understand evangelicalism one must grapple with the various ways politics, and especially the Pro-Life movement, have intersected with one another. To that end, Mark DeVine follows the last twenty years of evangelicalism to show the cross currents which have blown through our country.

Picking up a theme introduced by Jeff Robinson in his two-part narrative, the most significant movement among young evangelicals in North America between the years 2000 and 2020 was the resurgence of Reformed theology. Heading into the 2000’s Mark Driscoll and his Mars Hill Church and the Acts 29 church planting network influenced a broad swath of young evangelicals with Reformed theology. On the other coast, it was New York City pastor and The Gospel Coalition co-founder Timothy Keller who greatly influenced the Reformed resurgence among young evangelicals—what Colin Hansen called the “Young, Restless, and Reformed”—penetrating even the largest evangelical denominations and publishing houses. In the middle of the country were streams identified with the preaching of John Piper in Minneapolis, Don Carson’s writing and scholarship in Chicagoland, and Albert Mohler’s institutional leadership at The Southern Baptist Theological Seminary.

Perhaps the most surprising development in these yearly years of the Reformed Resurgence was its embrace by entity heads from the Southern Baptist Convention (SBC).[1]  Likewise, representing the rising generation of multi-site church pastors, Matt Chandler understood and shared with younger SBC-ers the staying power of institutions. At a 9Marks at 9 event, he said, “movements come-and-go, but institutions stay.” In this way, the staying power of this Reformed resurgence would occur largely within the safe harbor of larger denominations such as Keller’s own Presbyterian Church in America (PCA) the immense SBC.

1. Despite an abundance of anti-Calvinists present at all levels of the Southern Baptist Convention, Keller’s gospel-centered appeal to a rising generation of Calvinists in SBC seminaries and other institutions led to an ever-widening embrace of the Keller movement.

In what follows I will give a broad brushstroke of this movement along with some of its key thought leaders.

The Reformed Resurgence found rich soil in the theological ground cultivated for decades by bestselling theologians John R. W. Stott, J. I. Packer, R. C. Sproul, John MacArthur, and John Piper—men who led movements of their own. But by the mid 2000s, Driscoll—who also gained notoriety for his work in the emerging church—was arguably the face of the burgeoning recovery of Calvinism among young evangelicals sweeping the country. One impressive feature of the movement was its effective targeting of notoriously resistant contexts for gospel advance—the great cities of America. 20- and 30-somethings in skinny jeans were in cities across the nation, by the tens of thousands, happily sitting under candid preaching about sin, hell, and predestination. Through his nationwide reach, Driscoll helped make Calvinism cool.

Multiple scandals that eventually came to a head in 2014 led to the demise of Mars Hill and the dimming of Driscoll’s once bright and rising star. But other Calvinistic preachers continued preaching and leading, and one of them rose to greater prominence: Timothy Keller.[2] Keller had amazed church planters across the evangelical world by his success in Manhattan, and once The Reason For God appeared in 2008, Keller emerged as a nationally recognized star, a uniquely gifted apologist for the faith, and a church planting guru. With keen cultural awareness, Keller’s engagement within the context of a metropolitan city not only opened doors to share the gospel in New York—and in The New York Times—but it also resonated with Christians across the country hungry for a doctrinally-based approach to evangelism.

2. While it’s difficult to assess popularity, a rough metric in google trends (which shows how often certain terms are searched for by millions of people online) shows the general rise of Driscoll and then his eclipse by Keller after 2014—as measured by search results of “Mark Driscoll” and “Tim Keller.”

Indeed, both Driscoll and Keller sought to advance a robust Reformed theology in urban settings. But Keller’s strategic posture could hardly have contrasted more sharply with Driscoll’s. Driscoll assaulted Seattle audiences with an at times in-your-face, confrontational brand of preaching. Keller’s relaxed, open, comforting dialogical style prioritized the approach commended under the “About Us” tab on The Gospel Coalition website. What is true of the organization he co-founded is also true of himself—Keller strives to provide resources that are “winsome and wise, and centered on the gospel of Jesus Christ.”

By 2016, the Keller movement—at least in its theology of a sovereign God, its church planting philosophy, its Christocentric preaching method, and its apologetic posture toward the culture—found itself deeply ensconced within both the PCA and the SBC and many other centers of evangelical influence. Keller had released one bestselling book after another and had become for evangelicals something of a national sensation. Yet in 2016, Keller and his movement found itself the subject of unrelenting and withering criticism, not from the politically progressive communities they served, but from their conservative theological siblings who charged them with accommodating their message to the progressive urban cultures they inhabited.

So what went wrong? The Keller movement fell under the spell of what theologian Karl Barth called “alien norms”—the capture of the church’s message by external, and therefore, illegitimate pretenders to spiritual authority. The alien norms in Keller’s case were the political proclivities and antipathies of “blue communities”—college educated, Democrat-voting denizens of the nation’s cities. From its inception, the Keller movement vowed to find winsome ways to “draw highly secular and postmodern people, as well as reaching religious and traditional people,” but the functional emphasis was on the former groups—reaching the blue communities centered in America’s cities.[3]

3. This principle can also be seen in something like Keller’s document, “A Theology of Cities.”

But what counts as winsome in one community can change over time. And what counts as winsome to one community may outrage another, as the “Overton Window” illustrates. Named for the late policy analyst Joseph P. Overton, this “window” designates the range of politically acceptable views held within a given community at a given time. Since 2014, the so-called Overton Window has repeatedly lurched left and altered blue community sensibilities in the process. As the blue communities moved increasingly left, winsomeness to them demanded not only greater accommodation to liberal social causes and attitudes, but also un-winsomeness to those more culturally and theologically conservative. 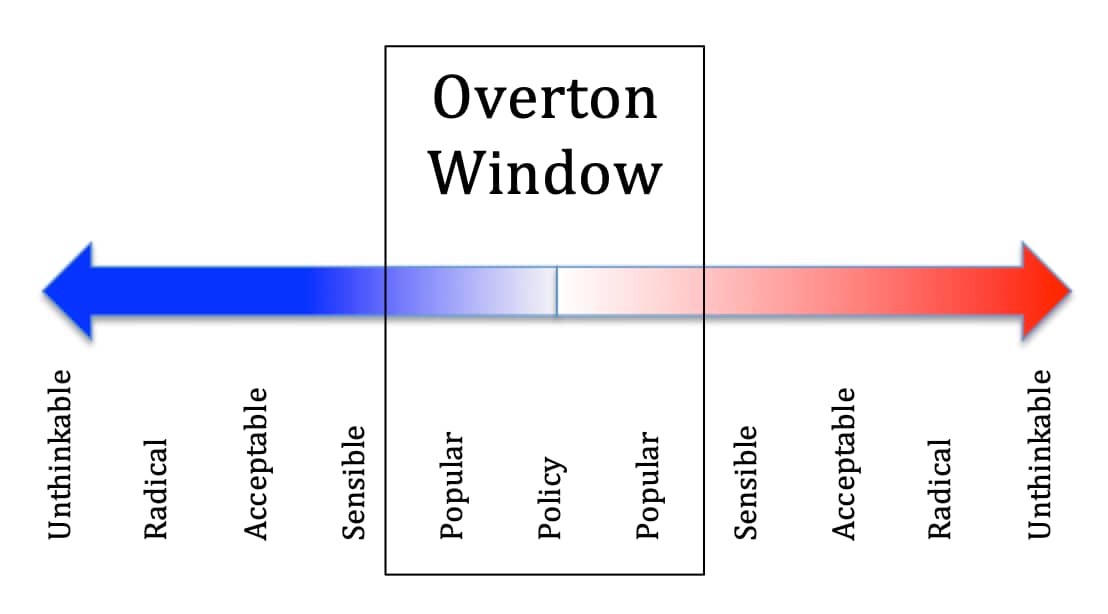 That new demand sheds light on Keller’s penchant for charging conservatives with living by fear, and of making an idol of conservative political loyalties. However, as the trope goes, Keller and his followers “punched right and coddled left,” as others have also noted. Both Keller and his followers rarely if ever called out the idolatry of liberal political loyalties among Democrat-voting blue communities, and they also re-framed issues to appeal to these communities. “Pro-Life” now meant being “whole-life pro-life” from womb to tomb in order to sanctify Christian votes for the Democrat party—a party where support for social programs for the living count just as much as anti-abortion pressure does for conservatives.

Later, this Keller movement reached its crescendo in 2018 when Texas pastor, Matt Chandler, lamented how Mike Pence speaking at that year’s SBC Annual Meeting made Southern Baptists “look like morons to the rest of the world”—and this comment came just months after dismissing as “fools” those who had left his church in protest of his social justice emphasis. Indeed, the pattern of the Keller movement’s un-winsomeness toward political conservatives could be seen in who was dismissed and who was platformed. As a result, a cancel culture began to emerge among Keller-movement evangelicals.

In response to this real and perceived move to the left, mega-church pastor John MacArthur found himself out of the evangelical conference loop after he helped spearhead the Dallas “Statement on Social Justice and the Gospel”. Again, black Southern Baptist best-selling author and preacher Voddie Baucham achieved persona non grata status when he refused to affirm the racism narrative surrounding the police shooting death of Michael Brown in Ferguson, Missouri.[4] The Gospel Coalition largely stopped publishing him after he penned this piece.

4. Voddie Baucham’s book, Fault Lines, faithfully lays out many of his own concerns. His book generated its own negative publicity, even as it voiced concerns that many others shared with him.

Similarly, theologian Wayne Grudem’s decades of service to Reformed evangelicals and his authoring of the perennially best-selling Systematic Theology failed to shield him from the Evangelical Industrial Complex (EIC).[5] Protective of blue community sensibility, EIC gate-keepers found no place for Grudem’s widely hailed Townhall piece, “Why Voting for Trump is a Good Moral Choice” (see the many linked evangelical responses strongly condemning the piece). Nor did these gate-keepers bring his conservative-leaning tome on Politics into the many discussions that arose in the years before the 2020 Presidential election.

5. The term “evangelical industrial complex,” has been around for at least the past decade, if not longer (See, for example how Skye Jethani at Christianity Today uses the term. I have also written about this concept in an article for The Federalist, a piece that prepared the way for this essay.

Ironically, the Reformed evangelical movement fell into the trap Timothy Keller himself had resolved to avoid. Keller warned, “If we are not deliberately thinking about our culture, we will simply be conformed to it without ever knowing it is happening.” To blue communities, un-woke evangelicals became, as Hilary Clinton taught the nation to view them, “a basket of deplorables.” Keller had hoped to strike a less political posture, but the blue communities to which the movement tied its branding, messaging, and platforming dictated terms of winsomeness incompatible with that aim.

The impingement of politics upon the message of the Keller movement calls into question the assumption that theology and politics either can or should be treated as separable enemies. Religious belief or lack thereof, moral convictions, and political loyalties inevitably inter-penetrate one another within communities whether colored blue, red, or purple. Efforts to spread the gospel that imagine otherwise risk unhappy and potentially shattering collisions with reality.

Mark DeVine serves as Associate Professor of Divinity at the Beeson Divinity School of Samford University in Birmingham where he teaches historical theology and doctrine. Dr. DeVine is the author of Bonhoeffer Speaks Today: Following Jesus as All Costs, RePlant: How a Dying Church Can Grow Again, Shalom Yesterday, Today, and Forever: Embracing All Three Dimensions of Creation and Redemption, and is an author at The Federalist, American Spectator, The Western Journal, and American Thinker. DeVine served as a missionary to Bangkok, Thailand, and has pastored churches in five states. While his home church is Hunter Street Baptist in Hoover, Alabama, he currently serves as Transitional Pastor of Smoke Rise Baptist Church in Smoke Rise, Alabama. He and his wife Jackie live are the parents of two grown sons.